On Monday i returned from my 4 days in Droushia with two friends. It’s the 3rd time in the space of 1 year that I’ve been there and there’s so much to see. It’s new to me and I’ve been to places i have not been there at all or at least it’s been many years since.

Friday – On our way to Droushia we stopped for (expensive and awful) coffee at Petra tou Romiou. At least we enjoyed the view. We found ourselves in Latsi around lunchtime for souvlaki before heading for the hotel.

Saturday – We visited the St. Raphael church in Pomos and we had lunch in Argaka (Saint Barbara) with a wonderful sea view. Before that, we had tea and cake at the Herbal Gardens in Ano Akourdaelia. This place is truly a hidden treasure. At night we went to Polis to watch the APOEL game and then had dinner at the (expensive but excellent) Old Town restaurant for steaks and lamb chops.

Sunday – It was mostly a relaxing day for us with lunch being our only break from the (wonderful Droushia Heights) hotel as we went to Kathikas and the Farmyard restaurant. It was a surreal experience because the place was packed with British expats who live in the area. The Sunday buffet was excellent.

Monday – This was our leaving day and we wanted to make the most of it. We headed for Agios Nikolaos and the Bridge of Tzelefos. I’ve never been there before and it was brilliant. On the way we went past Petra ton Hasampoulion which is more impressive than the photos give it credit. We then stopped at Omodos for a walk around the village and lunch. A bit disappointed with Omodos as i thought it was a bit too touristy. Finally we ended up in Platres for coffee and cake while playing two games of Hanabi. On our way back we had car trouble on the Nicosia-Limassol highway and had to abandon my car. We called for a taxi and rescue line. Even that could not ruin this trip. 🙂

A few conclusions i’ve drawn from these great vacations.

Firstly, that there is so much to see and explore in Cyprus. Secondly, holidays can be expensive in Cyprus. Although the hotel was reasonably priced, a lot of the places we visited were expensive. For example, in Platres the coffee and cake was €10 per person (Forest Park Hotel). Thirdly, i love the driving bit in spite of getting us lost in Paphos on our way back and then with our car troubles.

Finally, i want more of this in my life.

Posted by Costas Taliadoros on September 24, 2014 in Travel

At least at the time of writing this. I’m sitting in gate G03 in Vienna’s airport waiting for my flight back to Larnaca. I have 4 hours until departure time so I do have some time on my hands.

So, how was the trip to the greatest annual board games exhibition in the world? 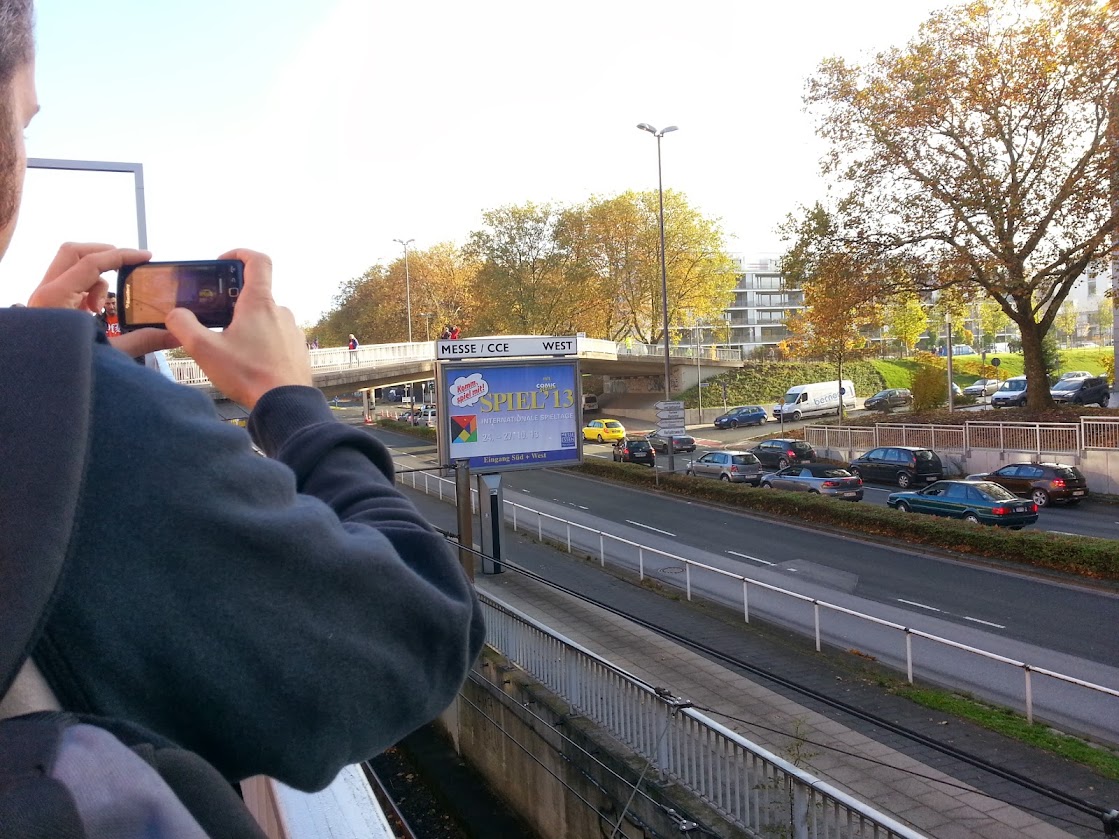 Well, I got an overload of new board games and the culture which exists in (and not only) Germany around this hobby. I think that’s what I’m taking back with me. This culture that I have seen here and which is missing in Cyprus. In Cyprus and many other parts of the world this is just another geek hobby. In Germany it’s also a family activity. I’ve seen families and friends sitting around a table (and even on the floor) playing board games together. Thinking,  arguing,  laughing together. Even crying! Kids’ games can be cruel sometimes.

At the exhibition there were 3 big halls divided into booths with publishers and designers promoting their board games. From Hasbro promoting the next Monopoly variant to Andre (the Dutch) with his first board game design developed in collaboration with a friend. I actually ended up buying Andre’s game after his explanation of how it plays and reading the rulebook. The last time I made such a purchase,  basically without reading or watching reviews, I ended up getting an awful game which I traded for another game. I’m not sure if it’s going to turn out any better this time but that’s not the point. The point is that you sit down with these designers and feel their passion while they are explaining their game. They are tired and anxious but the love for the hobby drives them. It’s definitely not about the money. There isn’t any. Nor fame. Apart from a couple of designers no one knows these people outside the hobby. It’s just love. 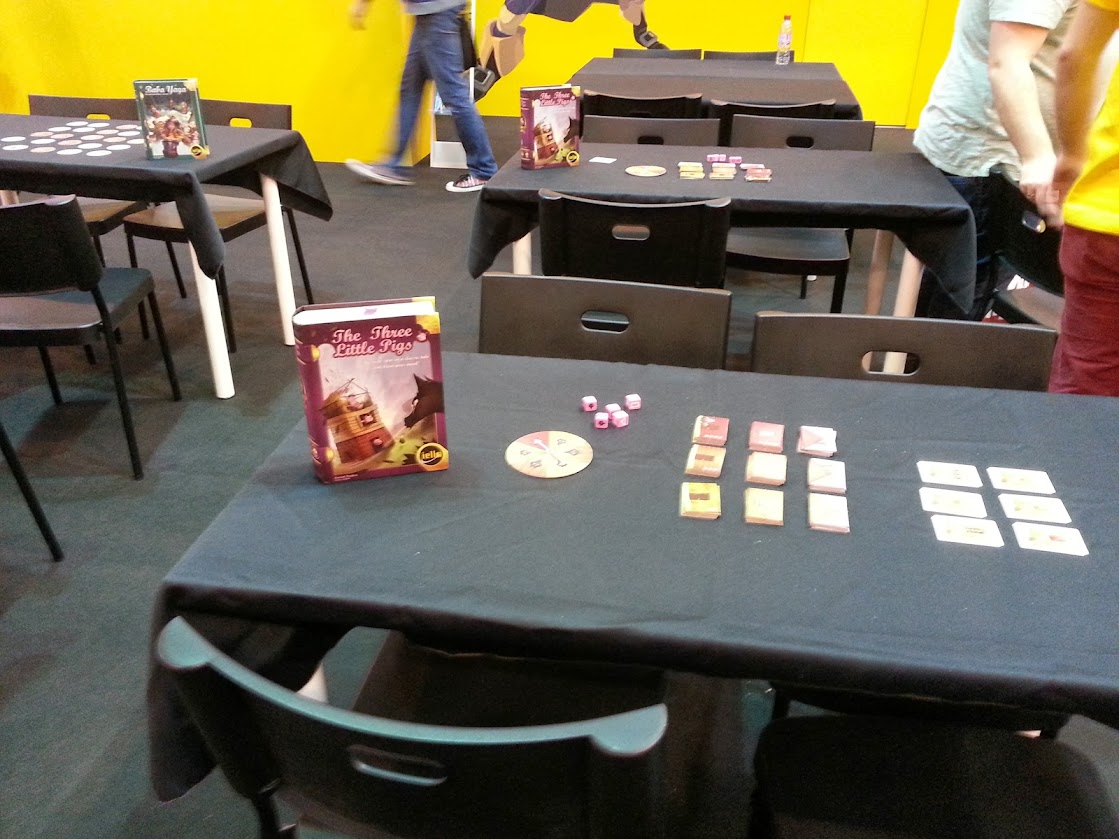 Three Little Pigs – What a lovely game. This is going to be my god daughter’s Christmas present! Shhh!

You could of course also buy games. Many people had trolleys and boxes filled with dozens of them. Yes I mean dozens and not small boxes either. This was especially evident on the first day.  I bought some games for myself and I also broke the rule of not buying new releases. 3 out of the 5 games I bought are completely new.  But games I could buy at anytime.  I did not need to come here to do it. However, I did manage to get one signed by the designer whom I greatly respect and listen to his podcasts regularly. There is an intimacy here you don’t find in video games that often. 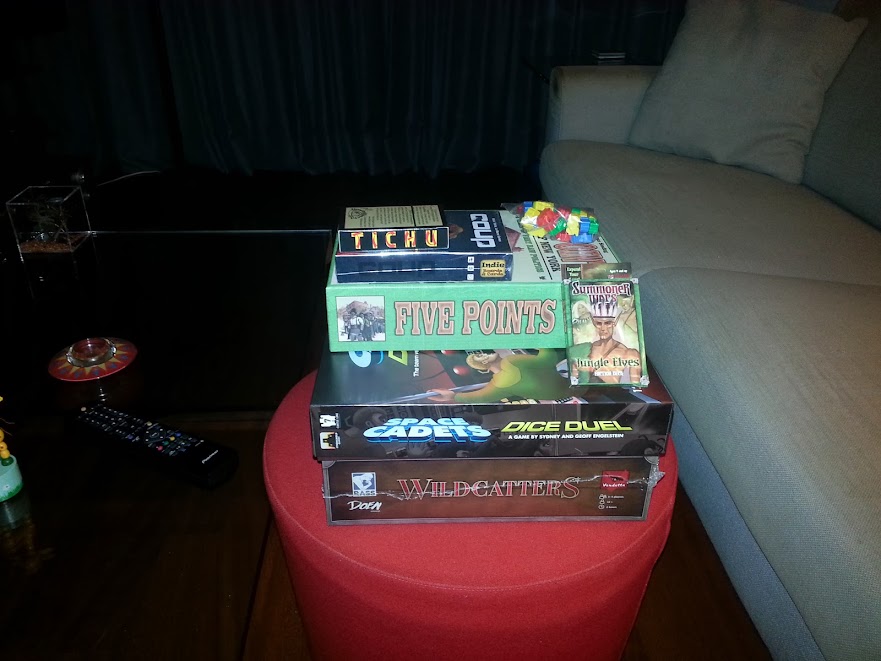 The loot (does not include the gifts)

Of course it wasn’t all perfect. I feel exhausted. For different reasons, some which can be explained and others which cannot, I barely got 4 hours of sleep every night. Combine that with the walking and standing from 10:00 to 19:00 in the first couple of days, and until around 14:00 the other two. The crowds (especially on Saturday) and the noise. You get the picture. If you remember from my first post I don’t expect to get sleep tomorrow either since I’m heading to the office first thing in the morning. It’s a bleak picture in physical terms. 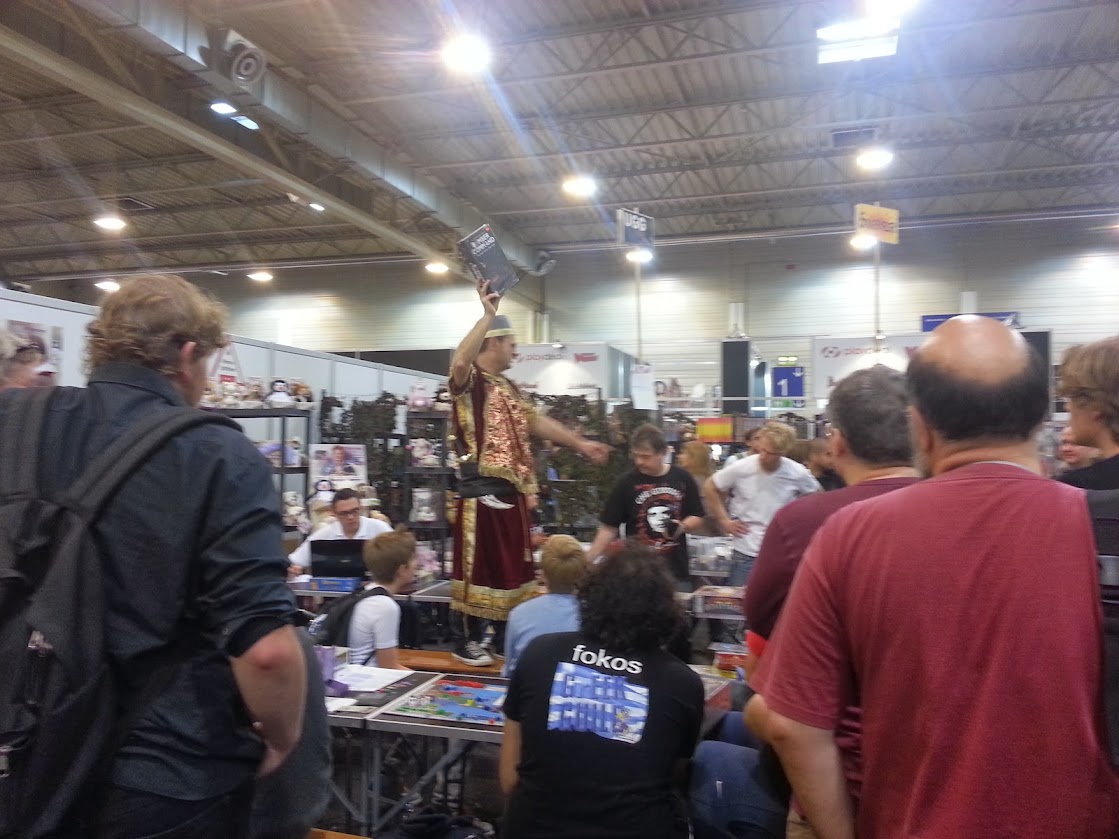 So,once again. Was it worth it?

Just to see that this hobby is not marginal everywhere in the world.  That there are countries where women and men of all ages play them.  That families and friends still enjoy each other’s company and are willing to spend time together by playing these games. Without having a tablet or a smartphone next to them.

Would I come back here again?

I doubt it.  I’ve seen what I came for although I did not realise what I was looking for when I left Cyprus. I came here looking for board games to play. Designers to see. To meet other board gamers from around the world.

But I have seen something greater than that.

Posted by Costas Taliadoros on October 29, 2013 in Board games, Travel

I’m writing this on Wednesday, morning 23 October 2013. I’m sitting at my home desktop, drinking my coffee with a plan to visit M&S bakery later for breakfast. Mmmmmmmmm…..

However, by the time this has been published i will be back in Cyprus from Germany. In fact i will also be back at the office. My plane lands at 00:45 Tuesday morning and i have to be at work that day because we have a Human Resources assessment from the UK. It was my fault…

The good news though is that i will be returning from Essen. The Mecca of board games. The biggest board games exhibition in the world which is from 24 to 27 of October. I’m going with a friend and we are flying through Vienna and Dusseldorf and then finally to Essen by car or train.

It’s the first time that i’m traveling somewhere and spending most (basically all) of my time at a single location.

Wake up
Breakfast
Travel to Exhibition Halls which open at 10:00
Leave the exhibition around 18:00 or 19:00
Grab a bite
Head back to the hotel for a shower and some rest
Then down to the ground floor of the hotel to play board games with other hotel residents

That basically sums it up. What i expect these days to be like.

I’ve already made my list of board games to check out, downloaded quite a few rulebooks (64 actually) and also left as much space as possible in my bag (half empty). I’m not planning to buy games but i have to be realistic. I will buy a few. It’s inevitable.

And that’s what’s making this trip so fantastic. A friend of mine went to Florida and to the Disney theme parks. This is something that i don’t find appealing at all.

However, i do understand the feeling. It’s the feeling of being 10 years old again and i’m loving it!

See you on Tuesday!

Posted by Costas Taliadoros on October 29, 2013 in Board games, Travel

When travelling by car, great music is critical as it makes the journey from just a chore to being a pleasure instead. Sometimes i wished i could drive a while longer just so that i could finish the track.

Dire Straits ‘ first album kept me company most of the time on the road.

Every single song in this album is magical but my favourites are Down To The Waterline, Water for Love, Sultans of Swing and Wild West End.

Posted by Costas Taliadoros on November 21, 2012 in Antidote, Music, Travel

A Cypriot tourist in Cyprus (1)

If you’d like to be made self-conscious of what you are doing then you should try being a tourist in Cyprus. The reaction you will receive can be as follows:

“I thought you were one of the teachers.” – The polite person in charge at the Larnaca Medieval Fort. While i was visiting the fort there were about 3-4 classes of elementary school kids.

“Mastre” – Monk at the entrance of the Stavrovouni Monastery. He wanted me to leave the camera in the car. It’s a place of worship not a tourist attraction. Hmm….Just wait a few hundred years…

“Are you a bus driver or a visitor?” – The seller at the Kourion canteen while i was paying for my croissant and bottle of water. I admitted to being the latter but i think i would have got a discount had i said bus driver.

Posted by Costas Taliadoros on November 19, 2012 in Antidote, Travel