2014 was a great year. In terms of how many board games i managed to play, the growth of the Cyprus Board Gamers Group and its activities. Most importantly however, in terms of the new people i got to know and the relationships that developed through the hobby. It’s not just about the games but it’s about the people you play with.

On the negative side the hobby took up a lot of my time. Maybe too much time. Also, i bought way too many games and i now have a big stack of games i have either not played yet or want to trade/sell. These are both mistakes i made in my video game days and i’d like to avoid repeating.

Looking forward, I have some ideas i want to explore in 2015 of how can i better use the hobby but for now this post is only a retrospective for 2014. 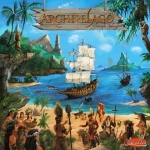 There is a very high correlation between how many times i played a game and how much i enjoyed it overall. Most of the best experiences i had were with games i played 5 or more times. This proves what i already knew to be true. Buy fewer games and enjoy the games i already have. For example, Sentinels of the Multiverse only really came into light once i started learning the decks.

Robinson Crusoe is now my favourite game to play solo and it’s probably the only one which i prefer to play solo rather than cooperatively. But it wasn’t just RC. I also loved my solo plays with Eldritch Horror, Sentinels of the Multiverse and Freedom: The Underground Railroad.

Finally i have to give special praise to Archipelago and Twilight Struggle. The former has become one of my all time favourite multiplayer games, giving Dominant Species a run for its money. But it was also a good year for Twilight Struggle which i managed to play 5 times. What a fantastic game this is when you have the time for it.

Posted by Costas Taliadoros on January 12, 2015 in Board games